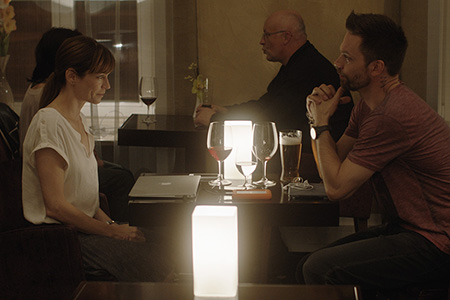 Mikko Kuparinen’s intelligent and beautifully shot drama is a prime reminder of the beauty of independent cinema and its profound emotional impact, even with the simplest of plots. He proves that cinema doesn’t need a classical Hollywood narrative or intensely complicated plot line to strike a chord with the viewer.
(…)
From the protagonist, Caroline, taking her hair down and the camera plunging out of her workaholic headspace, symbolically relishing in the surroundings as she does, to the modest but famous Jaakko revealing he has a child; both the director and actors brilliantly depict the complexities of dealing with life, relationships and achieving dreams whilst maintaining a living. Perhaps these aspects of life lend themselves to an emotional emptiness that both Caroline and Jaakko share, prompting a connection as they start to open up to each other – which is harder for the defensive and stern protagonist in particular.