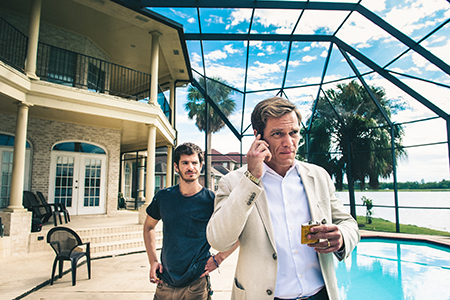 The U.S., to Carver, is a country nourished by self-cannibalisation. The only dependable way to provide for you and yours is to take from them and theirs; what’s more, the system was designed for it. “America doesn’t bail out losers,” he says. “It’s a nation that was built on bailing out winners. The country is rigged.”
(…)
What makes this so thrilling as drama isn’t simply the fact of Dennis’ corruption but the speed with which it happens. In a deeply plausible, surprisingly un-filmic way, he only gets around to wrestling with his conscience when it’s too late for the result to make any odds.

Perhaps Bahrani is invoking Brian De Palma’s Scarface in the Florida setting: certainly, Carver’s nihilistic state-of-the-nation rants recall Tony Montana in his self-actualising pomp, and Shannon delivers them with Tyrannosaur charisma. He and Garfield are an ideal double-act, and the possibility of a late Damascene conversion for either man seems unlikely, but never out of the question.


This kind of blunt-force presentation of the ramifications of certain governmental and banking policies over the past three decades — the action is set in 2010 — is rare in commercially minded American films, so it’s bracing and sobering to have it laid out so plainly as an everyday reality.