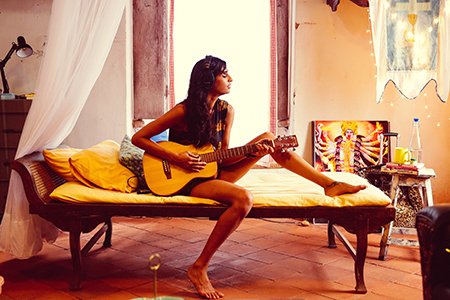 The best thing about this film is that Nalin’s six protagonists are brave women with no fake moralistic inhibitions, thus truly representing the urban women of today. They are justifiably hopping mad at the hypocritical society at large, which is still stuck in the medieval ages and is reluctant to evolve to be on par with their independent thinking. In Bollywood, where you rarely get to see even a chick flick, this comes as a breath of fresh air.


Angry Indian Goddesses is a pathbreaking film filled with humour, realism, tragedy and, ultimately, hope.
(…)
Right from the opening montage of the women before they gather at Freida’s home, it is clear that this film will be feisty, fiery and funny, all rolled into one – just like its leading ladies. The pace of those initial scenes, the deliberately raised decibel levels, the blistering anger of the protagonists, the comedy that is inherent in many of life’s bizarrely appalling situations and a touch of hyperbole are all woven together in a flawlessly edited, disturbing yet hilarious few minutes. Though this mosaic is a contrast to the understated nature of the rest of the film, its flaming fury still manages to set the tone for what is to come.