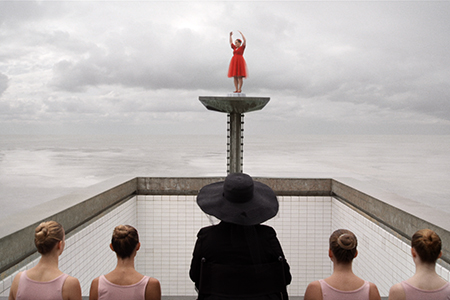 Depression has been described as the plague of the 21st Century. In the documentary Good Girl (Flink Pike), Norwegian director Solveig Melkeraaen bravely puts her own face to this devastating illness, documenting in brutal close-up her mental collapse and repeated electroconvulsive therapy.
(…)
While she interviews her family and close friends, going so far as to conduct a vox pop on her depression on the street, Melkeraaen doesn’t come up with easy answers for the sudden onset of her illness. She was the typical “good girl”, she says, high-achieving and eager to please, directing a series of well-received documentaries at a very young age. “Being good isn’t necessarily a bad thing,” she says. “Until it gets the better of you”. The film starts after Melkeraaen’s first series of electroshock treatments, documenting her faltering steps towards recovery with the help of her family and boyfriend Ravn.

(…) there are clearly no answers – it is Melkeraaen’s honest, stricken, brave face which continues to haunt.