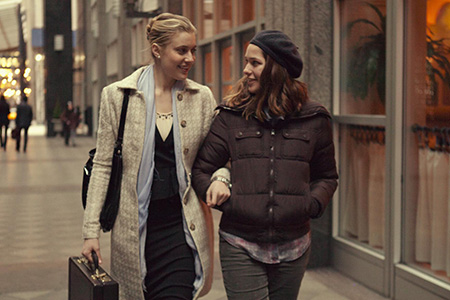 Tracy, an aspiring writer who’s having a tough time fitting in at school (“It’s like being at a party where you don’t know anybody, all the time,” she laments), marvels at Brooke’s unbridled joie de vivre; Brooke, who already feels over-the-hill at 30, feels similarly energized by her young admirer. By the time their first night together is up, the seeds of a short story have begun to take root in Tracy’s mind — a development that allows Baumbach to once again riff wryly on ideas of artistic license and intellectual property, favorite subjects of a filmmaker who has himself drawn deeply at the well of personal experience.


Mistress America is above all about the relationship between two women and their aspirations. Its leads are mesmerising. Gerwig punctuates Brooke’s abrasive dazzle with her idiosyncratic range of comic twitches, hesitations and eloquently abrupt sideways glances. (…)

This movie is head-spinningly chic, certainly – down to a soundtrack including Suicide’s sublime Dream Baby Dream – but it’s also a pointed commentary on people desperate to impress. (…) Right now, when it comes to urbane screen wit, Baumbach is the master, and Gerwig the undisputed mistress.