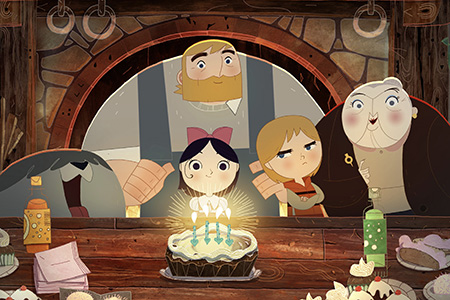 Song of the Sea

The films of Tomm Moore are like a trove of gemstones in the hill behind your house. Finding them is instantly life-improving, but the thrill of discovery comes with the comforting sense that they’ve been with you forever.

The story it tells is the kind that grows up with you: one that makes perfect, shimmering sense to a four-year-old, yet somehow gets richer with every year that passes.

Though it’s preoccupied with loss, Song of the Sea is a film that can barely stop itself from giving, and every scene shines with imaginative flourishes that could only be possible in two-dimensional, hand-drawn animation.


Like The Secret of Kells, director Tomm Moore’s first feature, Song of the Sea blends Celtic legends, bravura design and animation, and intelligent storytelling that understands but never patronises young viewers, to create an exquisite and rewarding work.

Folky music and Studio Ghibli-level flights of eerie fancy are obvious pleasures, but even more subtle and entrancing is the way Moore and his team use echoed shapes to suggest hidden patterns in nature and parallels between the real and the mythical.