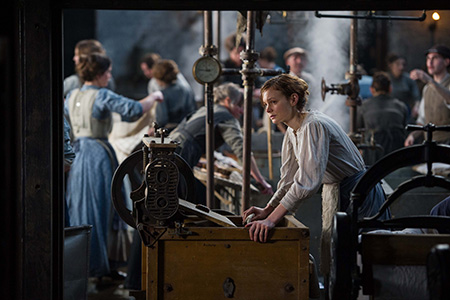 It’s written, shot and acted with a hot-blooded urgency that reminds you the struggle it depicts is an ongoing one – and which shakes up this most well-behaved of genres with a surge of civil disobedience. (…) Gavron and her cinematographer Eduard Grau shoot the scenes of protest like they’re contemporary news footage, using tight framing and a long depth-of-field to de-prettify the action, and lend it a bustling immediacy that sweeps you up into the mood of the moment.


One of the ways Suffragette escapes the traps of its genre is to focus not on the leadership but on the rank and file, on an ordinary woman whose life is changed by political engagement. Her name is Maud Watts, and she’s played by Carey Mulligan with somber determination and inspiring pluck.


Suffragette derives its considerable intellectual and emotional might from recognizing that symbolic nature of the vote. Centered on the fight by British working-class women for enfranchisement, the film is an inspirational tragedy — one that celebrates the courage and shrewdness of the defiant women who made monumental progress, while also subtly acknowledging the limitations of the ballot to correct injustice.