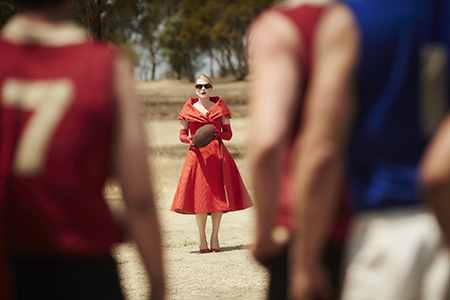 The Dressmaker is the first feature in 18 years from Australian filmmaker Jocelyn Moorhouse. (…) Here she cracks the facade of dry Australian realism, so that the familiarity of the rural landscape is rent asunder by stylish spectacle and caustic wit.

The adaptation of Rosalie Ham’s 2000 novel is credited to Moorhouse and her husband, fellow director P. J. Hogan, and as with his last feature, 2012’s Mental, the tone is wildly diverse and genres clash with spaghetti-western framing and melodramatic close-ups freely intertwined. There’s also a fascination with the lives of ignored women, and the irreverent forces that rescue them.


Winslet, a difficult actress to root against under any circumstances, has us in her palm from the moment she steps into frame, looking like an avenging dark angel bathed in ’50s noir shadows.