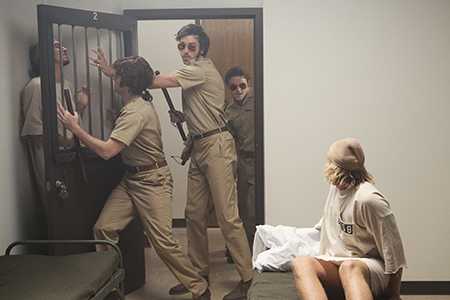 The Stanford Prison Experiment begins with giggles but ends in full psychological break. Alvarez shoots in close-up, allowing you to see the slow shift as these characters begin to slide into their new personas.
(…)
Alvarez does a masterful job of showing how, yes, most recognised that what they were doing was fake, but that didn’t make the emotions any less real. This dreamlike discomfort engulfs the film.


Fine ensemble acting brings a notorious psychological study to life in The Stanford Prison Experiment. The research, now 44 years old, may today seem as if it merely confirmed the obvious, but the film, by Kyle Patrick Alvarez, certainly makes you feel the claustrophobic intensity of what went on.
(…)
The experiment’s methodologies and meanings have been analyzed endlessly over the years, and the film doesn’t delve deeply into these interpretations and critiques. It doesn’t need to; this stark and riveting version of events speaks for itself.